It’s a pleasure to introduce the first undergraduate researcher featured on the Headwaters blog! Gretchen Wichman is a wundergrad at California State University, Monterey Bay (CSUMB), where she has been a member of Dr. John Olson’s Watershed Environments and Ecology Lab for the past three years. Dr. Olson is also her advisor for the Undergraduate Research Opportunities Center (UROC) Scholar program at her home institution. Gretchen moved to Kansas during the summer of 2020 to complete a National Science Foundation (NSF) - Research Experiences for Undergraduates (REU) project with Dr. Walter Dodds at Kansas State University. Her project was funded by the Kansas NSF Established Program to Stimulate Competitive Research (EPSCoR) award, Microbiomes of Aquatic, Plant, and Soil Systems (MAPS). 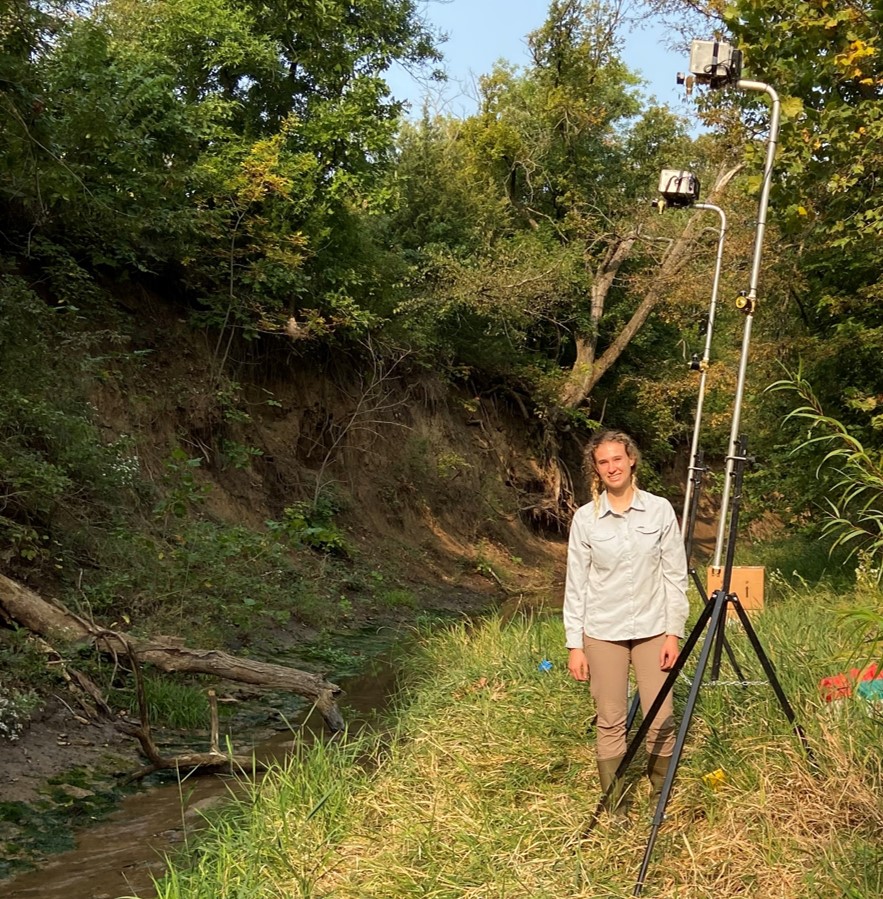 Gretchen discovered the REU opportunity by meeting James Guinnip, PhD candidate in the Dodds lab and author of this blog post, at the 2019 SFS meeting in Salt Lake City, Utah. She attended his talk about how nutrient export by intermittent streams is affected by characteristics of the dry period, then approached him in the hallway to ask if he knew of any summer research opportunities. To his surprise, she was willing to move from sunny California to The Sunflower State where she became an invaluable member of the Dodds lab. Here’s what Gretchen had to say about becoming interested in researching freshwater ecosystems as an undergraduate, her experience with the REU program, and her goals for the future:

Although I was not frequently exposed to streams during my childhood, I am discovering my interest in freshwater systems during college. I grew up in the coastal community of San Diego, California where I was dropped off at the beach in the summers. My first semester in college, I joined Dr. John Olson’s Watershed Environments and Ecology Lab. This is when I discovered my curiosity about how rivers function. I started helping with hydrology monitoring at the Santa Lucia Conservancy in Monterey, California. A year later, I started leading the hydrology monitoring project. The project helps to better manage groundwater pumping by comparing monthly and previous (1990s) stream discharge rates to maintain similar streamflow. My involvement in this project has reinforced my career goal to become a government researcher to manage long-term streamflow projects.

My involvement in research during high school guided my journey to finding Dr. Olson’s lab and majoring in environmental science. I joined the 500 Women in Science group while in high school, where members connected me with a research lab. I started by helping master’s students with their research at San Diego State University Coastal and Marine Institute. I gained valuable research skills as well as mentorship through the college application process. The master’s student I worked most closely with advised me to go beyond the basic campus tour when visiting schools. When I visited California State University, Monterey Bay (CSUMB), Dr. John Olson’s Watershed Environments and Ecology Lab stuck out to me because his students showed me rehydrating moss from dry streams. My interest in working in Dr. Olson’s lab led to my environmental science major concentrating in watershed systems. The past three years working in Dr. Olson’s lab has exposed me to interesting research ranging from eDNA collection to detect amphibian species to assessing streamflow in the central Rocky Mountains. 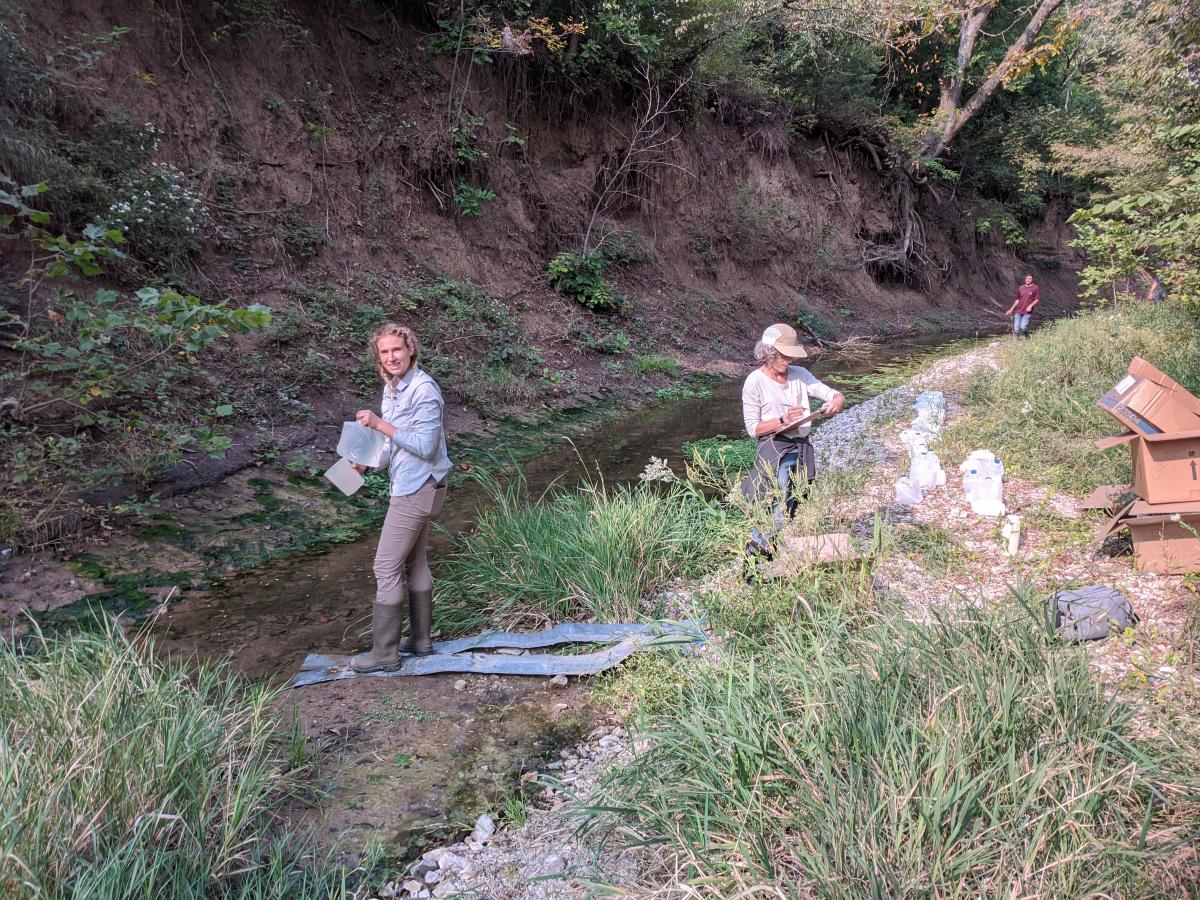 The Instars Program supported my attendance to the SFS meeting in 2019. This was my first time at a conference. The familiar and smiling faces of the Instars mentors made the conference feel smaller. Ultimately, the Instars program helped me feel at home in the freshwater science community. I’m excited to watch the Instars Program expand with new year-round mentoring opportunities.

At Kansas State University, my REU project is centered on the question: what determines the capacity for nutrient retention/release in streams and their associated riparian zones? There's been a lot of progress in the past 2-3 decades on what governs nutrient retention in streams, although riparian zones have largely been ignored by stream ecologists. Integrating knowledge of ecosystem function in streams and riparian zones will provide a more comprehensive understanding of riparian corridors.This project will further our understanding of the role that riparian vegetation plays in trapping nutrients and sediment to protect water quality.

Kings Creek is our experimental site, located on the Konza Prairie Biological Station, which is also home to the NSF-funded Konza Prairie Long-Term Ecological Research (LTER) station. This tallgrass prairie land was never tilled for agricultural use because of its shallow, rocky soils. Kings Creek is the only site in the USGS Hydrologic Benchmark Network with a watershed consisting entirely of pristine tallgrass prairie. Kings Creek is monitored by LTER Network, National Ecological Observatory Network (NEON), and MAPS sensors.

Originally, a rainfall simulation experiment over the riparian zone was conducted by Brittany Kirsch for her master’s thesis at the University of Nebraska-Lincoln. Dr. Jessica Corman and Dr. Andrea Basche advised her research. Dr. Walter Dodds became interested in expanding this project after listening to Dr. Corman’s seminar about Kirschs’ work. She spoke about “making it rain” over the riparian zone in streams flowing through agricultural and restored prairie landscapes. They detected a pulse of nitrate, ammonium, phosphorus, and suspended sediments in the stream channel. A bromide tracer was used to account for the pulse of added water from the simulated rainfall. Kirsch led the field experiments, even designing the rainfall sprinklers. The custom rain sprinklers were mailed from the University Nebraska-Lincoln to Kansas State University so the Dodds Lab could try the experiment at Kings Creek. Active collaboration is one of my favorite characteristics of the SFS community! 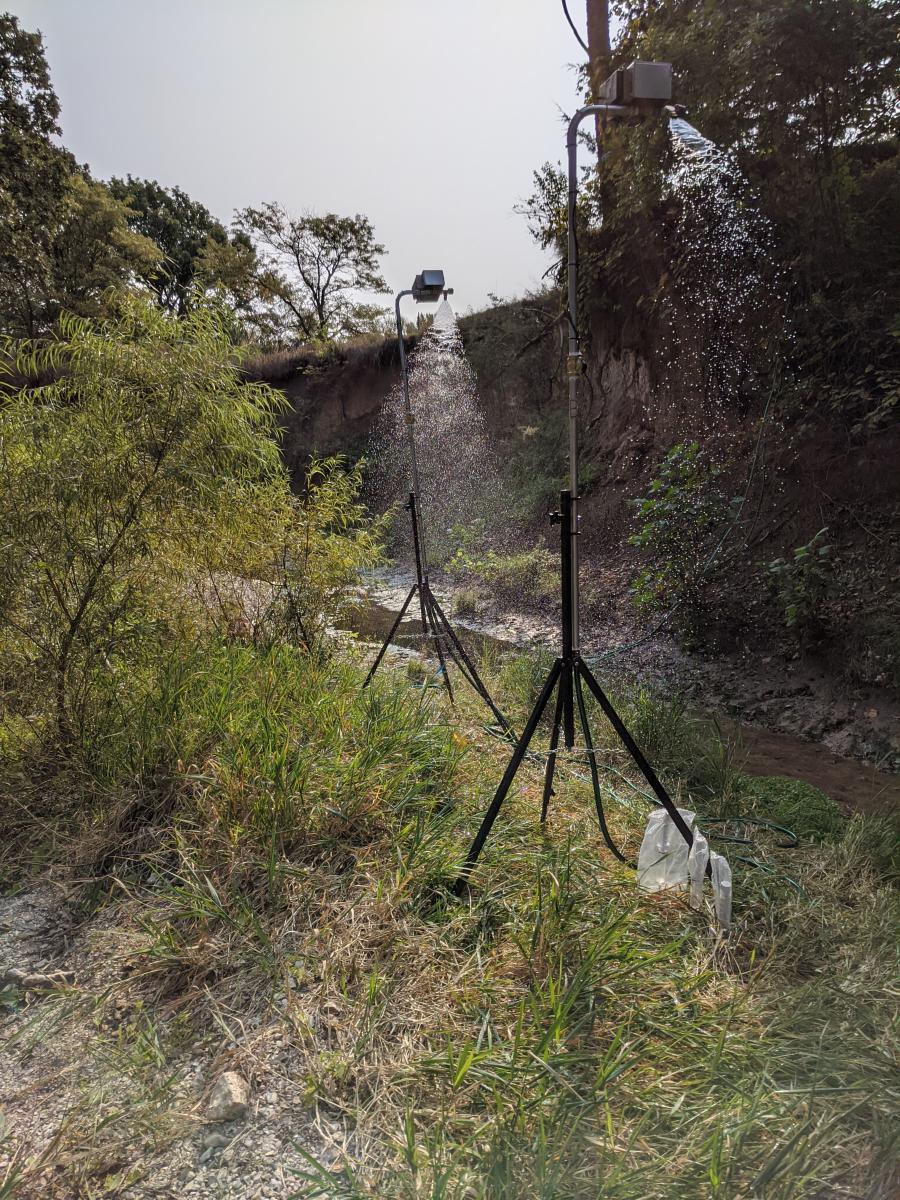 For my REU project,I led a rainfall simulation experiment over the riparian zone at Kings Creek. Our rainfall event was about 6.3 cm of total precipitation over a period of 1.22 hours with a 6.4 x 3.2 m rainfall footprint. We used deionized spring water as our “rainwater”. We added 15NO3- isotopic tracer and NaBr conservative solute to our “rainwater” to trace hydrologic flow paths and nitrogen uptake. Stable isotopic tracers like 15N are differentiated from 14N which has a substantially greater natural abundance in nature. The conservative solute and the isotopic tracer allowed us to tell the difference between our rainwater in the stream and the pre-existing stream water. Plus we could follow the fate of the added nitrate. We sampled stream water 21.7 m upstream of the release, 8.5 m downstream, and 68 m farther downstream. We sampled stream water over a time course to characterize nitrogen uptake in the stream channel and the riparian zone. We evaluated the role of riparian uptake and transport by sampling soil water chemistry before and after the simulated rainfall. Riparian grasses were sampled to determine whether the 15N label was incorporated into the grass biomass. This sampling regime allowed for the assessment of hydrologic flow paths. It also tracked the movement of material transport (i.e. nutrients, ions, and suspended sediments) from the riparian soils to the stream channel.

Shaun Baughman, a technician in the Dodds lab, and I used the LINX II protocol to extract and measure dissolved 15NO3- in the sampled stream water. Shaun processed riparian soil and grass samples for subsequent isotopic and other chemical analyses. Lane Lundeen, another technician in the Dodds lab, helped by filtering the water samples for determination of suspended sediment concentrations. Analytical chemistry labs processed the water samples for nutrient and ion concentrations.

We found the flow paths of the simulated rainfall did travel through the riparian zone and into Kings Creek! Although we detected 15NO3- and NaBr in the stream channel, we did not detect a pulse of nitrate, chloride, sulfate, fluorine, or suspended sediments. The pulse of sodium bromide traveled from the riparian zone and into the stream in about 9 minutes and then traveled downstream 60 m in about 40 minutes. Conversely, Kirsch’s experiment in Nebraska did detect a pulse of nitrate, ammonium, phosphorus, and suspended sediments. One reason we may have observed different results could be that Kirsch’s sites were in an agriculturally-influenced watershed while our site was in a prairie dominated watershed on the Konza Prairie LTER.

These results suggest that the strength of the riparian-stream connections is related to land use. Riparian corridors provide ecosystem services such as protecting water quality by retaining nutrients. We know that the disruption of riparian zones can lead to more nutrients entering freshwater systems. However, we do not have clear ideas of what determines the capacity for nutrient retention/release in streams and their associated riparian zones. This project will benefit from decades-long records of stream nutrient chemistry and hydrology for Kings Creek. The results may help generalize our understanding of riparian zone function and how it relates to land use. Stay tuned for further results!

My favorite part of my REU experience was the sense of community. It was so cool to work with researchers at Kansas State University and the Konza Prairie Biological Station. Specifically, on the field experiment day it was apparent how many people were supporting our research efforts. Eight people from multiple labs helped us collect and transport samples. Prior to the field experiment day, Konza Prairie project managers, Patrick O’Neal and Jim Larkins, helped me troubleshoot equipment issues. Many people helped me with my REU project and made me feel a part of the research community. I’d like to give a special shout-out to Shaun Baughman, the newest member of the Dodds Lab, because she helped a lot with my project and is furthering her journey in the field of freshwater science.

Prior to visiting Kansas State University, I had little experience doing lab work. Usually, the only time I was in the lab was to find field gear. Adapting to daily lab work was a steep learning curve. As a result of my REU experience, I not only gained lab work skills but I also gained an understanding of the endurance required to complete start to finish research. A specific example of a challenging moment is when I was half way through processing samples in the lab when a hot plate caught on fire and the sink plumbing started gushing water. We overcame the obstacle by using one less hot plate and a different sink.

Overall, my involvement in undergraduate research has inspired my career goals. I am an undergraduate studying environmental science, technology, and policy concentrating in watershed systems. I am in my third year and attend California State University, Monterey Bay (CSUMB). My REU experience has motivated me to learn more about riparian corridors and how to better manage them. The most eye opening component of my REU experience was visiting the KSU biology department and the Konza LTER. I would like to continue to visit new places to conduct freshwater science research. I’m interested in attending graduate school in Queensland or New South Wales, Australia to engage in an international research network. I plan to begin a master’s program in fall 2022 to support my career goal of becoming a hydrologist for the United States Geological Survey (USGS). I intend to develop a thesis that will inform river management in coastal watersheds.

If you’d like to talk with Gretchen, you can reach her via email at gwichman@csumb.edu. You can also view her ePortfolio at gretchenwichman.com. Check out her Instagram takeover here!