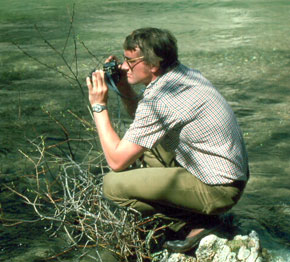 Robert (Bob) Carl Petersen (compiled by Ken Cummins, Bert Cushing and Wayne Minshall) Bob received his BS Rutgers University (1967) and received both an MS (1970) and a PhD (1974) from Michigan State University. He began his graduate work with Ken Cummins at the University of Pittsburgh, where he worked on the trophic relations of the predaceous, fluid-ingesting cladoceran Leptodora kindtii. When Ken moved to Michigan State, Bob followed and began his very productive career in lotic ecology. Bob worked on a wide range of stream research problems at Michigan State, culminating in the publication of his paper on leaf litter processing in woodland streams, which has become a Citation Classic. Bob’s thesis research was on the predaceous megalopteran Nigronia serricomis in Augusta Creek. After graduation, Bob took a postdoctoral appointment at the University of Umea, Sweden, where he taught field courses and conducted stream research; he also met his future wife Lena there. After his first year in Sweden, Bob was persuaded to return to the US to serve as field project manager for the NSF River Continuum Concept project. Bob worked hard to keep the project on schedule and insure that the data reached publication; his strength in management of large data sets, quantitative skills, and writing ability contributed immensely to the success of the project. A year of this period was spent in Idaho, where he assisted Wayne Minshall in preparation for study of the 8th-order Salmon River. They became close friends and their collaboration grew into a productive team effort, extending over 15 years and culminating in the joint publication of a dozen articles, including lead authorship on two RCC papers.

After finishing his role in the RCC project, Bob returned to Sweden where he took a position in the Institute of Limnology at the University of Lund. It was here that he established the Stream and Benthic Group, and (with Lena) developed a very broad and outstanding program in stream ecology. The Petersen family (with daughter Linea and son Bobby) spent 1 ½ years at the Appalachian Environmental Laboratory of the University of Maryland as visiting scientists with Ken and his wife Peggy (Wilzbach).

Bob and family returned to Sweden where he continued his aquatic research that took on an ever-increasing international flavor. In July 1992, Bob returned to the US to take a position with the U.S. Geological Survey in the National Water Quality Assessment program in Denver. He was tremendously excited about his new job and said he “felt like he was finally in paradise”. He and Bob Averett worked closely to develop a successful NAWQA program. Sadly, stream ecology lost both Bobs within a year - Averett to cancer and Petersen to a massive stroke incident to Type I diabetes.

Dr. Robert Carl Petersen died on May 3, 1995, after a long illness following a debilitating stroke in September 1992; he was 50. Bob will be remembered by all those who knew him as an outstanding scientist who maintained a high standard of research and scholarly activity. His infectious enthusiasm and boundless energy made many field and laboratory projects not only possible, but exciting and fun. His friends from Michigan State will never forget the many field days doing the “Nigronia Stomp” or the RCC crews extensively testing periphyton metabolism methods during a week-long marathon or doing endless particle sampling. His creativity and broad familiarity with the published ecological literature were the basis of many intellectually-stimulating discussions and productive efforts. Bob certainly embodied the intensity, joy, and excitement that real stream research is about. In addition to his professional side, Bob was a loyal, friendly, gregarious person with a great sense of humor, and a love for animals, especially smaller domestic ones, which he raised when he could. He also had a deep love of classical music for which he truly had a remarkable ability to recognize even the shortest of passages.

It is intended that the NABS Endowment Fund in Bob’s name will be used to bring a graduate student from outside of North America to the annual NABS meeting.