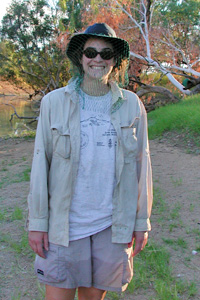 Dr Christy Fellows was born in Maryland, USA. She was always attracted to the natural world and often conducted informal investigations of forests, rivers and wetlands in Maryland and in North Carolina, where her family had a holiday home. She graduated as valedictorian of her high school class, with her participation in scientific research programs beginning during her high school years. She has two peer-reviewed papers from her high school summer work in a biomedical laboratory.

Christy earned Bachelor of Science degrees in both Biology and Geology at the University of Maryland, graduating with honours. She moved to the University of New Mexico for her PhD research, where she focused her attention on whole stream metabolism (including the role of the hyporheic zone), nutrient spiralling and energy flows in headwater streams.

After receiving her PhD degree in 2000, Christy moved to Australia, initially as a Postdoctoral Research Fellow at Griffith University. In Australia, she initiated a new program of research on the role of riparian buffer zones and groundwater denitrification in controlling and mitigating nitrate pollution in streams, attracting significant external funding and forging new collaborations with State and Federal Government agency scientists. She also worked on dryland river systems in western Queensland, examining spatial and temporal patterns of benthic metabolism and highlighting the role that flows and floods play in driving ecosystem processes. From 2005, Christy also led a team of researchers examining aspects of the processing and transport of carbon and nitrogen in three contrasting river systems in eastern Australia. This research incorporated measures of nutrient concentrations, extracellular microbial enzymes, laboratory dissolved organic carbon bioassays and stable isotope reconstructions of food webs to bring together nutrient and energy flow disciplines along the lengths of these rivers.

As important to her as her own research, Christy also began to nurture a new generation of researchers as a supervisor of a devoted team of postgraduate students at Griffith University. She always gave so much to those around her and always with her trademark smile and warmth. Professor Ian O’Connor, Vice-Chancellor and President of Griffith University, described Christy as “a passionate and talented young scientist, a dedicated educator, an inspiration to the many Griffith students she mentored.”

Taking on the Deputy Head of School role in the Griffith School of Environment in 2006, Christy developed Australia's first Bachelor of Science in Water Resources, which aimed to produce graduates equally qualified in water science, resource management and policy. The course immediately attracted strong industry backing and scholarship offers, as water authorities struggled to fill the shortage of qualified water professionals.

Constantly seeking innovative teaching approaches, Christy also took part in The Earlier the Better project, identifying and putting in place early intervention strategies for first-year students at risk. In 2005 she earned a Griffith University Faculty of Environmental Sciences Teaching Citation for the Aquatic Ecology course she convened. She urged students of all ages to take an active role in addressing Australia's water crisis, leading field ecology summer camps enabling students to get hands-on research experience. Her outreach work extended to local high schools as well, where she actively involved young students in her research into Brisbane's urban river systems.

On August 10 2002, Christy married fellow aquatic ecologist Dr Wade Hadwen, who is also a NABS member. Their dedication to the natural environment only helped to strengthen both their personal and professional relationship. On 4th April 2007, their son, Eli was born. Some might say he is Christy’s (or their) greatest achievement.

Christy's dedication, vision, talents as a scientist and an educator, and of course her sparkling personality, are a great loss to both the NABS and Australian water research communities. It is hoped that her dedication to aquatic research and student supervision, both in the US and Australia, will be remembered and celebrated in perpetuity, especially by those students who receive funding support from the Christy Fellows Endowment Fund to attend future NABS annual meetings.