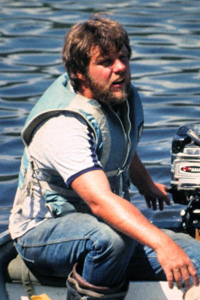 Karl received his B.A. degree in Biology from Thiel College, Greenville, Pennsylvania. He earned his M.S. degree in Entomology from the University of Delaware in 1968, studying the effects of moisture and temperature variations on soybean mites. Enrolling at Cornell University for a Ph.D. degree in Aquatic Entomology, he studied the biology and immature stages of Ephydridae (shore flies) and received his degree in 1973.

In 1972 Dr. Simpson was employed as a Research Scientist by the New York State Department of Health, Albany, New York, and headed up the newly formed Stream Biomonitoring Unit. This group performed macroinvertebrate surveys to assess water quality in flowing waters in New York State. Over the next 14 years, the biomonitoring program led into several areas of ancillary research, including taxonomy and ecology of Chironomidae (midges), PCB uptake by aquatic insects, macroinvertebrate communities of acid-stressed streams, and ecology of the Hudson River. Dr. Simpson also continued to publish several papers on the Ephydridae, but was probably best known for his publications on the identification of Chironomidae. He was a member of several scientific societies, and was especially active in the North American Benthological Society and the New England Association of Environmental Biologists.

Karl’s enthusiasm and originality was a major contributing to the success of the bioassessment program in the State of New York.  Along with his colleague, Bob Bode, they made major contributions to the field of applied biology and water quality monitoring.