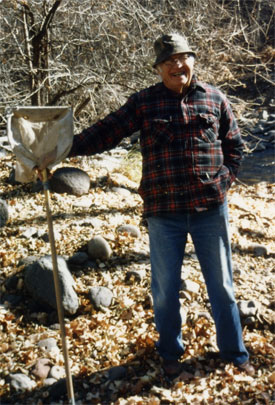 Dr. Milt Sanderson is widely renown as a specialist on the genus Phyllophaga (Melolonthinae), and he conducted most of his work at the Illinois Natural History Survey. He first encountered scarabs as a child, when he caught Cotinis nitida in Oklahoma, tied string to their legs, and flew them as kites. He began his studies in 1928 when he entered the University of Kansas. He was interested in Phyllophaga and water beetles from the start and began collecting and publishing papers about them. NABs members are most likely to know of Milt through his work on dryopoid and elmid water beetles.

His first full time job was at the University of Arkansas, where he worked on white grubs (Phyllophaga spp. and Cyclocephala spp.). From there, he spent many years at the Illinois Natural History Survey, but, being a state agency, much of his work was "directed", meaning that he could not devote as much time to Phyllophaga as he would have wished. He has been retired since 1975, but he conducted his own post-retirement studies of aquatic Hemiptera and wild flowers.