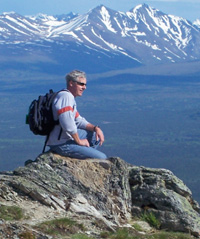 Patrick (Pat) Mulholland was on the leading edge of stream biogeochemical and watershed research for over 30 years, and he was instrumental in shaping the careers and research of countless individuals through his keen insights, openness to sharing ideas, and compassion for mentoring. His work as a scholar and intellectual contributor to the field was complimented by his leadership skills to bring researchers together to address complex ecological questions. Pat was an international leader and distinguished scientist. He was a Fellow of the American Association for the Advancement of Science, and a Fellow of the American Geophysical Union. In addition, Pat was named the Distinguished Scientist of the Year by Oak Ridge National Laboratory (ORNL) in 2011, was cited as a contributing scientist to the Nobel Peace Prize in 2007, and received the Award of Excellence from the North American Benthological Society in 2011.

In addition to his research contributions to freshwater science, Pat was an active member and leader of the Society for Freshwater Science. He was a member of the Executive Committee, chair of the Awards Committee, member of the Endowment Committee, and Associate Editor of J-NABS. In addition to his service to NABS, he served on countless advisory boards, committees, and review panels for the National Science Foundation, Department of Energy, Environmental Protection Agency, CALFED, and Everglades National Park.

Pat was a wonderful collaborator, and a quiet and humble leader. He possessed a strong work ethic, great focus, broad vision, and wonderful creativity. Pat was a natural mentor having formally advised 10 graduate students and seven postdoctoral scholars, and he worked with countless additional students and scientists at all stages of their careers with an openness to sharing ideas and insights that was second nature to him. He was encouraging to everyone.