Ecologist and diatomist Charles David (Dave) McIntire passed away peacefully on January 4, 2019, from complications from leukemia. He was 86 years old. 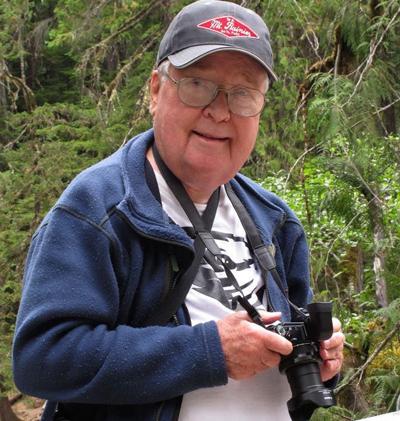 Dave’s life trajectory was anything but typical for an academic, ecologist, and phycologist.  He was born in St. Louis, Missouri, in 1932, but his life’s passions went far beyond diatoms and systems ecology.  When he was in sixth grade, he took up the alto saxophone and began his lifelong love of jazz music. In high school, Dave joined the musician’s union and a local professional band, after which he attended Southern Methodist University, receiving a degree in Business Administration, which he jokingly said later was mostly “monkey business.” Dave was a member of the SMU Mustang Band and in the summers began to play with a band at Yellowstone Park, developing a lifelong love affair with Yellowstone.  After graduating SMU, Dave volunteered for the draft and eventually was assigned to a radar platoon and stationed with the 7th Army in Karlsruhe, Germany. His military life changed when he joined the 7th Army Jazz Band; Dave’s army stories were definitely not for the faint of heart.

After Dave was discharged, he moved to Corvallis to pursue a degree in Fisheries at Oregon State University. He continued on with a MS degree that involved management of fish ponds at OSU.  During this time, he consulted with Dr. Harry Phinney, who helped him identify the pond algae.  This was the beginning of Dave’s long relationship with Harry, who had a large impact on Dave’s life and career.  A short time after finishing his master’s degree, Dave was informed by Harry that Dr. Charles (Chuck) Warren had just received a grant from the National Science Foundation to set up laboratory streams, and that the project needed Ph.D. students.  Dave became Dr. Phinney’s student and was allowed to design his own specific experiments that were compatible with the overall objective of the project.  The result was Dave’s pioneering research on how benthic stream metabolism was affected by environmental variables such as light, current, and temperature.  It was during this period that Dave met his wife Carol, who worked at OSU.

After completing his Ph.D., Dave accepted a faculty position in the Department of Botany and Plant Pathology at OSU.   He quickly developed his own research program and in 1967 obtained an NSF grant to investigate the distribution and abundance of the diatom flora in estuaries along the Oregon coast, which involved both marine mesocosms and field work.  During this time, Dave developed a professional relationship with Drs. Ruth Patrick and Charles Reimer at the Academy of Natural Science in Philadelphia in order to better learn diatom taxonomy.  Rumor had it that Dr. Patrick tried to hire Dave during one of his summer visits, but he did not want to leave Oregon for the “urban jungle of Philadelphia”.

In 1970, Dave received a NSF Science Faculty Fellowship to spend a one-year sabbatical at the Center for Quantitative Science at the University of Washington.  Here he audited courses on quantitative analysis, which ultimately led him to be one of the first ecologists to examine patterns in diatom communities using multivariate ordination techniques.   Also during his sabbatical, Dave used General Systems Theory to synthesize the results of his laboratory stream experiments into a mathematical model of periphyton dynamics in lotic systems.  Funding from OSU’s involvement in the International Biological Program allowed him to eventually expand this into a larger model of the total stream ecosystem.  The model explains fundamental dynamic inter-relationships and dependencies among processes that occur in lotic ecosystems.  His publications in Ecological Monographs in the 1970s complemented research on nutrient spiraling, a concept that still permeates the field.

In the mid-1970’s, Dave research interests and funding returned to the sea, where he examined diatom communities in Oregon estuaries.  Students working on his coastal surveys were amazed and intimidated to watch him demonstrate the use of water skis to move across the soupy mudflats to take diatom samples.  His stories of falling face first into the intertidal mud always resulted in howls of laughter, with the loudest laughs coming from Dave himself.  In the 1980’s and 1990’s Dave was involved in new laboratory stream work by the OSU “Stream Team”.  These experiments were particularly focused on herbivory, and he used some of those data to further develop that aspect of his stream process model.  Also during this period, Dave became involved a 10-year study of Crater Lake funded by the Park Service to provide baseline data for management purposes.  His work focused on phytoplankton and mosses in the lake, as well as statistical analysis of the entire data set.

Dave’s retirement in 1994 freed him to pursue his lifelong love of photography full time.  Dave was an accomplished landscape photographer, and his work has been exhibited in several shows, galleries, and books.  He claimed that he enjoyed music and photography because they “represent a merger between an impressive technical component and a creative, emotional component.”  Dave was a humble human being who never sought the spotlight, but those of us who were fortunate to work with him recognized his unique ability to merge creativity with technical skills, which resulted in his groundbreaking contributions to freshwater ecology.

Originally submitted to DIATOM-L by: