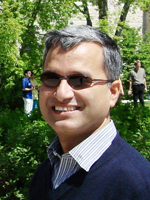 Freshwater scientists from Nepal, India, Pakistan, Bangladesh, Bhutan, are forming a chapter in this part of Asia to develop the capacity of freshwater scientists from Hindu Kush-Himalayan Region (HKH) in the field of bio-monitoring & bio-assessment. HKH region encompasses 3,500 km over all or part of these nations. The other two countries this Chapter is planning to include the members from are Afghanistan in the west and Myanmar in the east. Ten large Asian river systems originate from HKH Region and the basins of these rivers provide water to 1.3 billion people, a fifth of the world’s population.

This chapter brings the advantages and benefits of an international scientific society to a group of nations who have rich biodiversity, with some of the world’s hot biodiversity spots, waiting to be explored and documented. But, due to poor taxonomic and documentation knowledge have not been in a position to meet the objectives.